After a thankfully uneventful arrival in Egypt, including all my luggage arriving at the same time, my first few days in Cairo were personal days that I arranged so that I could attend the baptism of my friend’s twins.

The baptism started at the (for Egypt) shockingly early hour of 7:30 am. And we all were only about 15 minutes or so late, which was pretty good! Luckily there weren’t any other babies being baptized the same day, so we had the baptism chapel to ourselves. Last time I was there for a baptism there were seven babies in total, and the small room built for about 20 held at least 50 people, all throwing elbows and vying to get to the best positions to see and take pictures!

The babies did great, even with the full-body dunks: 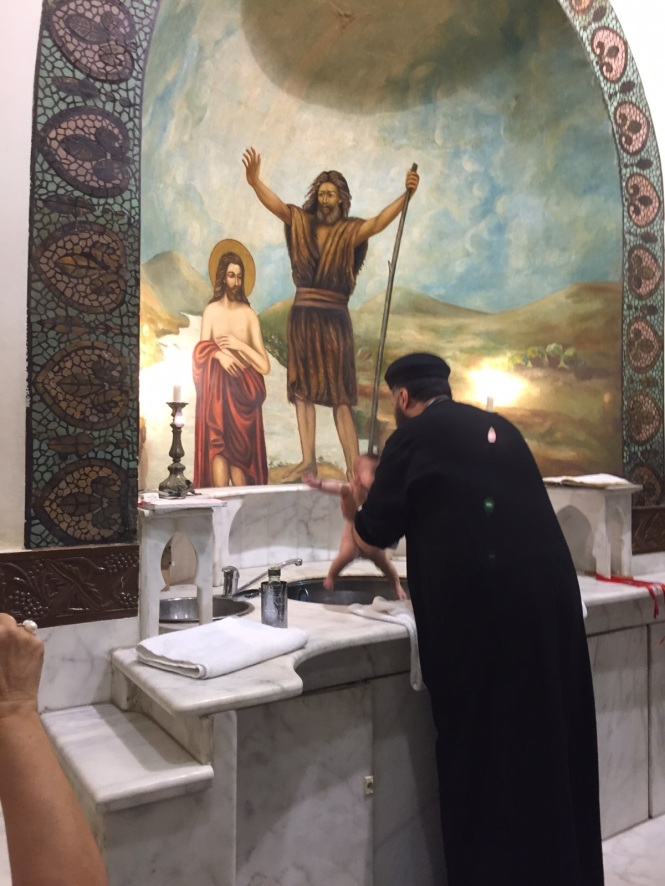 One highlight was the part where the priest had to be the first to dress the babies after they were anointed… Which included putting the diapers on them!

And the babies looked absurdly adorable (as did we):

The next day I played Egypt guide and took some Cairo-first-timers to visit Khan-el-Khalili, the main old Egyptian market. In good Egyptian style we had a hair-raising taxi ride to get there. Really I have been in a lot of, as my friend Meg would say, ass-clenching taxi rides, and this definitely qualified.

I probably haven’t been to Khan-el-Khallili in about two years, but over the course of the last decade or so I have visited there so many times that I feel pretty familiar with it and comfortable navigating the alleyways and finding my favorite shops. However when the taxi driver pulled over and said “Khan-el-Khallili,” I didn’t recognize a bit! I couldn’t even tell we were there! Partly it was because he stopped in an unusual spot, but it turns out they removed a large pedestrian bridge, a major landmark. But it really threw me off and made me realize that I have been visiting Egypt and Cairo long enough to see how things change on the scale of a decade. Was the pedestrian bridge removed in order to decrease access into the Khan (a major tourist destination), and therefore increase security? The dip in tourism was blatantly evident in how few people were in the khan. But other changes in Cairo have nothing to do with the ripple effects of recent political events: The rise of cupcake shops, the proliferation of starbucks-like cafes, the advent of mid-range Egyptian food restaurants– not just street food, fastfood or high end foreign restaurants.  I don’t know what all this means except that I am getting older and probably should wear more sunscreen.

First we went to Bab Zuweila- one of the old gates to the medieval city, still standing with two large minaret-like towers flanking it, that you can climb up for fantastic views of the city. If you don’t have claustrophobia or fear of heights that is. It’s 1000 years old. 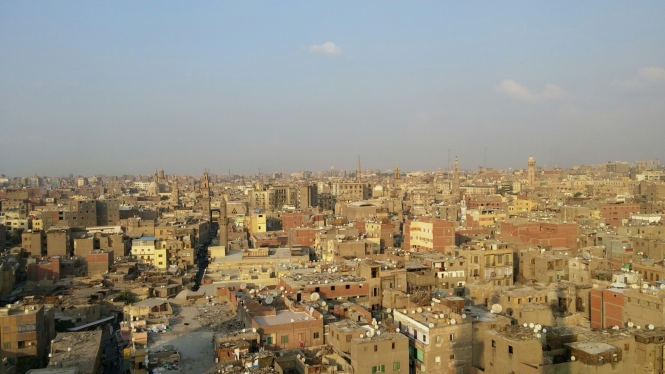 When in Khan el-khallili it is also essential to stop and have tea at Fishawys- a cafe that has been operating, practically 24-7 for over 200 years:

Bab zuweila and Fishawy’s have certainly seen Cairo change on a scale that puts my decade squarely in the realm of paltry! There is certainly no shortage of history here. Tomorrow I’ll go on to start researching rocks that have barely moved for 4000 to 40,000 years. Even Bab zuweila is young from that perspective!